Even in my dreams you’re watching me

I really wonder what they see

I really wonder what you see

In the new dance solo Dreamer, choreographer Anne-Mareike Hess crosses the thin line between the real and imagined, the felt and the fantasized: the Dreamer is a sensual embodiment of awakened femininity as well as a transparent surface for the spectators' projections. She lures the audience with her ever-changing appearance into a surreal space that gradually exposes patriarchal inscriptions in the female body.

After the solo Warrior (2018), Dreamer is the second dance piece in which the artist tries to fight her way through the tangle of stereotypical ideas of being a woman. She illustrates the multitudes of the human, where the dream operates as a vehicle to visualize individual ambiguity. In order to deconstruct gender roles, Anne-Mareike Hess explores female identity inspired by mythology and popular culture.

"There are radical, contradicting mood changes, sometimes with a provocative, ironic laugh, strong and self-confident, then sunk back in like a girl in need of protection: a stormy outburst and departure."

"In the one-hour choreography, Anne-Mareike Hess skilfully satirizes ideals of femininity, demonstrates sexualized stereotypes and consistently breaks them again in order to identify the female body as a projection screen. A furious, poetic and sensual dance around your own self-image, woven into a dream through which others see it."

„It’s an intense performance. The Dreamer fights against the bonds that hamper her, both physically and symbolically, showing the extraordinary talent of Anne-Mareike Hess as a performer, the expressive as well as suggestive potential of each of the fibers of her body.“

„It is a remarkable piece from a formal point of view, in staging the dream state. It is also a virtuos creation on a conceptual level, in its ability to filter through emotions the intimate and the collective, the singular and the universal, contemporary codes and the heritage of the past. The theme, extremely current, echoes with subtlety the feminist discourse of deconstruction of patriarchal structures, the debates on gender but also the questions raised by the entertainment society at work on social networks, which plays with stereotypes as much as it does infuriates them.“ 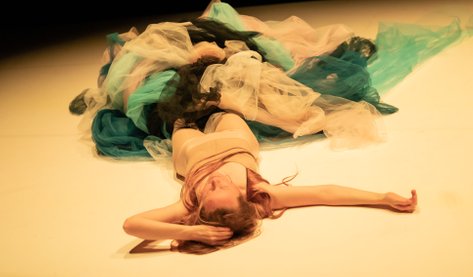 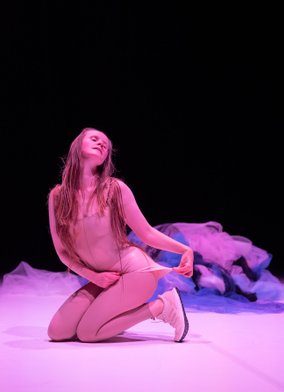 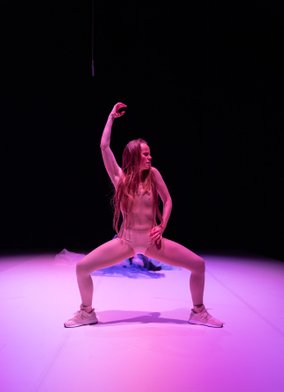 The premier of Dreamer was planned december 2020

Due to the COVID-19 pandemic this creation had to be interruped and postponed to 2021.

Here are the new dates: