My main focus is the body and its inherent potential for transformation; Its status and exposure in society, as well as its presentation, representation and perception on-stage. My work is characterized by precise movement language, embodying and materializing identity questions and themes relevant to our times and sharing them with an audience.

Between 2017-2019 Anne-Mareike was supported by the Grand Luxe network; and since 2020 she is an associate artist at Neimënster in Luxembourg. Previously, she was awarded with the emerging artists prize “Stiftung zur Förderung junger Talente” (2012) and the “Danzpraïs” (2015) from the Ministry of Culture in Luxembourg.

Furthermore, it is important to Anne-Mareike to team up with other artists in the reflections around and practice of dance and choreography in relation to our society. Alongside her work as a choreographer and dancer, she is doing that by working as an artistic advisor, coach and teacher.

...the luxembourgish dancer and choreographer is one of the artists who, through her presence, instantly fills the whole space and captivates the spectator. (...) the proof that the radiant emittance of strength has nothing to do with pomp and sensationalism.

There are some artists whose next creation we expect frenziedly. The luxembourgish dancer and choreographer Anne-Mareike Hess is one of them. Because we love her exigent work that is without concession.

Founded in 2018, the Luxembourg based dance company utopic productions is built around the work of choreographer Anne-Mareike Hess. utopic productions advocates artistic inspiration and encourages the production, promotion and the reflection around contemporary dance in the context of our society.

ANNE-MAREIKE HESS is based in Luxembourg and Berlin and works as a choreographer and performer in the field of contemporary dance.

Trained at the Conservatory and at TROIS C-L in Luxembourg, she continued her studies at the HfMDK in Frankfurt/Main and at HZT Inter-University Center for Dance in Berlin (Master in Choreography).

As a performer, Anne-Mareike has worked with choreographers such as William Forsythe (Human Writes), Eeva Muilu, Rosalind Goldberg (MIT and Jump with me), Ingri Fiksdal (Cosmic body) or Miriam Horwitz (Nijinsky), with which she has performed in a number of prestigious venues around the world.

Anne-Mareike’s works have been shown at numerous venues and festivals throughout Europe. This includes: I believe that we are having a dialogue, Tanzwut and Synchronization in process. In 2017 Anne-Mareike was commissioned by the Théâtre d’Esch and the Grand Théâtre de la Ville de Luxembourg to create Give me a reason to feel.

Her first evening-long solo Warrior premiered at the end of 2018 and has been selected by AEROWAVES Twenty20.

Currently, she is preparing a new solo, Dreamer, premiering at the end of 2020.

Anne-Mareike works in close collaboration with TROIS C-L in Luxembourg and Skogen in Gothenburg; and since 2016 she has been an associate artist at Weld in Stockholm. 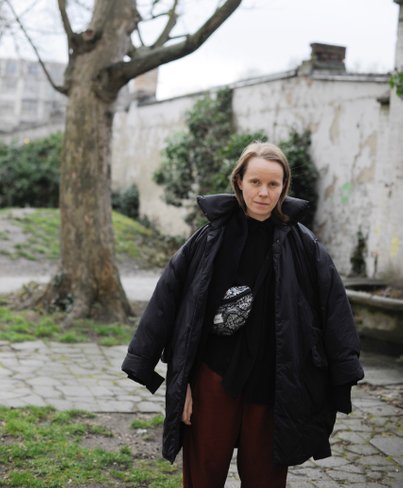